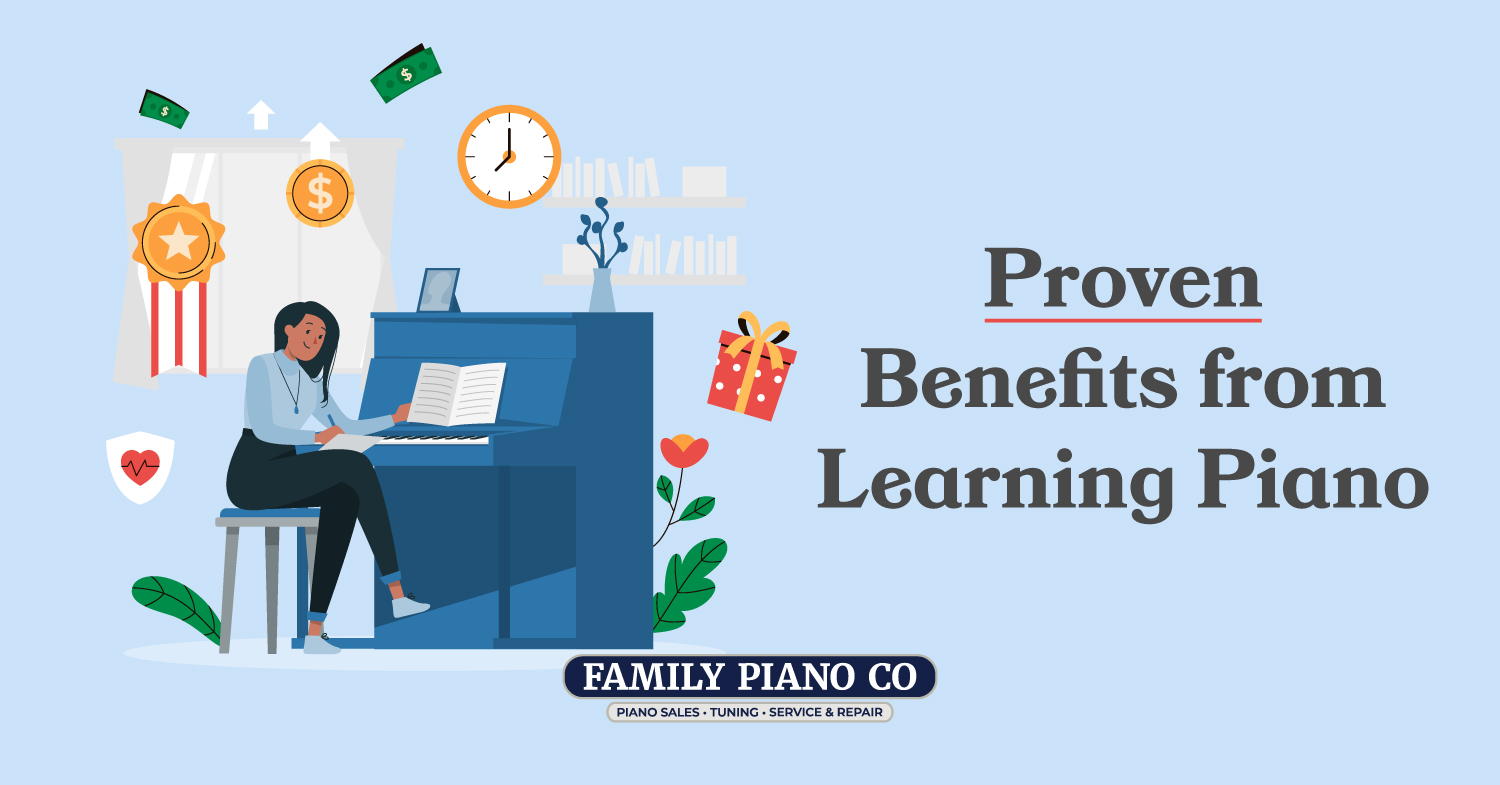 Learning to play piano is a rewarding experience that can bring anyone a lifetime of joy. No matter your age or musical ability, playing piano has numerous benefits!

We think that most people vaguely know this is true, but you may not be aware of the specific ways in which it can improve your life.

In this blog post, we will explore a few major benefits that come with learning piano — and provide reputable sources for them too!

From improving cognitive skills to reducing stress and fostering social connections, piano has something to offer everyone no matter age or skill level!

There’s no way we could ever cover every benefit that comes with piano. So we do invite you to leave a comment with any additional benefits — even if just personal!

This is a huge one that we found little evidence against.

While exact details and causations are still being researched, it is generally agreed upon that taking music lessons as a child boosts brain development in a variety of ways.

In 2006, one study found that even after just a single year of musical training, children performed better on a test that was correlated with better literacy, memory, ability to do math, and a higher IQ (compared to a similar group of children who didn’t receive any music lessons). This was a small group of kids focused on earlier development from ages 4-6, but there have been similar findings to support this claim in older children within larger groups as well. (Source: First Evidence That Musical Training Affects Brain Development In Young Children)

Other studies have found significant development can happen even sooner than that too. In the 2008, “Musical Training Influences Linguistic Abilities in 8-Year-Old Children: More Evidence for Brain Plasticity” study, just 6 months of musical training was enough to demonstrate improved brain plasticity, and that these “relatively short periods of training have strong consequences on the functional organization of the children’s brain.”

Of course, smart children should then become smart adults. We were able to find two studies supporting the idea that taking music lessons as a kid promotes cognitive function into adulthood. Specifically, there were many correlations with improved neuroplasticity and the ability to learn overall. (Sources: A Little Goes a Long Way: How the Adult Brain Is Shaped by Musical Training in Childhood ; Older Adults Benefit from Music Training Early in Life: Biological Evidence for Long-Term Training-Driven Plasticity)

The benefits of music are therefore long-lasting, and even if a child doesn’t take to piano forever, it definitely gives them lifelong advantages!

Wondering if it’s too early (or late) for your kid to take lessons? Read our blog post: When Should My Child Start Piano?

The benefits of music aren’t only limited to children though. And in fact, there is more and more research being done on how piano specifically positively affects older adults.

Generally, it’s being shown that older adults who practice piano regularly could be fighting off cognitive and functional decline as a result.

One study found that a group of such pianists showed a significant improvement on the Stroop test, which measures executive function, inhibitory control, and attention. A trend in the enhancement of visual scanning and motor ability was also found. (Source: Effects of music learning and piano practice on cognitive function, mood and quality of life in older adults)

While there’s still a ton of research left to be done in this field, the findings that are discovered have been largely positive. And they largely suggest that playing piano is linked to improvements in executive function in old age.

We’ve already answered this in another blog post, but no: you’re never too old to start playing piano!

Emotional benefits are admittedly hard to qualify empirically. Feelings are obviously subjective, and moods can easily be swayed which makes them harder to report on.

Still, it is commonly self-reported that playing piano helps people relax and eases stress. And there have been research efforts made that largely support similar findings!

On the whole, researches do find that people who play the piano tend to experience less anxiety and depression than their non-musical peers. One study found that taking piano lessons decreased depression, induced positive mood states, and improved the psychological and physical quality of life in their group of older adults (Source: “Effects of music learning and piano practice on cognitive function, mood and quality of life in older adults“). Another drew similar conclusions about reduced levels of depression, stress, and anxiety, and additionally saw improved audio-visual perception even beyond things related to music (Source: An RCT study showing few weeks of music lessons enhance audio-visual temporal processing).

Similar findings have also been reported in younger participants. A personal favorite report of mine, “Effects of Three Years of Piano Instruction on Children’s Academic Achievement, School Performance and Self-Esteem“, followed 117 4th graders in Montreal who 1) hadn’t taken music lessons before, 2) didn’t own a piano, and 3) came from households with an annual income of less than ~$30,000. They gave their experimental group a free piano and lessons for three years, and gave everyone tests for self-esteem and academic performance. It was then concluded that the group of children who took three years of piano lessons had a significantly stronger sense of self-esteem by the end.

It’s maybe worth mentioning that these benefits aren’t tied exclusively to playing piano or taking lessons though (even though we do highly recommend both those things). There are therapeutic outcomes of just playing any instrument overall which include decreased anxiety and agitation, better communication skills, improved emotional expression. (Source: A Prescription for Music Lessons)

And it’s worth concluding on the fact that you don’t have to be good at piano to love piano or to be proud of yourself! Findings from “The Benefits of Adult Piano Study as Self-Reported by Selected Adult Piano Students” showed that adult piano students placed the highest value on simply fulfilling their dreams of playing. This was the highest-rated of 31 different benefits between the 711 people surveyed — even above technical improvement and skill!

Empathy is the ability to understand and share the feelings of another person. We won’t enter the debate on if this skill is on the decline in our current fast-paced times. However, I think we can all agree that the world could always use more. It’s critical to fostering personal growth, better relationships and more integrated communities.

Playing piano eventually requires musicians to deeply consider their emotions, the emotions of the audience, and the emotions of the composer — a huge and constant exercise in complex thinking. This alone is thought to lead to a higher emotional intelligence. But there have been efforts to try and prove the claim empirically too.

Making music with others also creates great opportunities to develop emotional and social skills. For instance, in a piano duet format, it’s important to have an instinctual understanding of the piece and other player. Most communication is conveyed without direct statements, and conflicts are resolved in a similar fashion.

We were able to find a particularly interesting article that observed the relationship between two players rehearsing a duet. They would write down their reflections after each of the 8 rehearsals, commenting on how their performance was developing. The concluding analysis of their entries highlights the importance and development of empathy in this setting. Specifically, the ability to experiment without fear of judgement and make mistakes without fear of embarrassment was crucial in developing musical interpretations. Empathy thus plays a big role in enabling a safe space for players to express themselves freely. (Source: Empathy in Piano Duet Rehearsal and Performance)

Empathy is a keystone skill. It leads to better communication, accountability, honesty, and better team-based skills overall. Through the process of making and playing music, pianists can improve this trait — and ultimately improve their relationships.

As we’ve mentioned, there is a lot of research yet to be done in the field of music and its effects on the brain. So some things we can’t quite qualify with scientific backing (at least, not yet).

Still, ask any long-time pianist, and I’m sure they’d all agree that playing piano:

Science seems close to discovering how exactly this works. In fact, music therapy and piano playing is increasingly being pointed to as a potential treatment for ADHD!

Note: while there is research on music training and motor skills — Martins et al., 2018; Tokya & Freund, 2006; Watson, 2006 — to our surprise, there wasn’t much we could find with specific regards to piano yet!

” The most intricately and perfectly coordinated of all voluntary movements in the animal kingdom are those of the human hand and fingers, and perhaps in no other human activity do memory, complex integration, and muscular coordination surpass the achievements of the skilled piants. ” – Homer W. Smith, From Fish to Philosopher.

So not only is piano a fun hobby, but it also has many proven cognitive and emotional benefits. As you learn and improve, you’ll develop a wide range of skills that will then benefit you in all areas of your life.

We’re excited to keep seeing research on music education develop. And we’re happy to know definitively that whether you’re an early beginner or very experienced, playing piano is well-documented as being a beneficial experience.

Of course, we know we’ve only covered a select few key benefits. The truth is that you could never explain every single benefit that music and piano have. Learning piano is a lifelong pursuit that will keep you challenged and engaged, and its rewards are endless.

Ready to play? Or need help with practicing better? Check out our Ultimate Guide on Practicing Piano!

Our Top 10 Pianists for Inspiration

From time to time, we can all use a little inspiration to move forward. For some people, seeing someone do something... 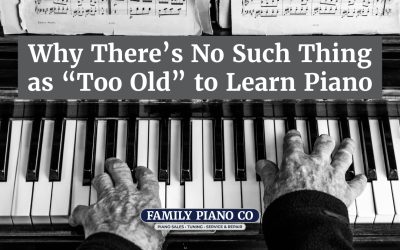 There’s No Such Thing as “Too Old to Learn Piano”

One of the most common comments I hear from adults of all ages is that it's “too late” for them to begin learning...

When Should My Child Start Piano?

As a piano teacher, the most common question I get from folks who are anxious to give their child(ren) a head start:...