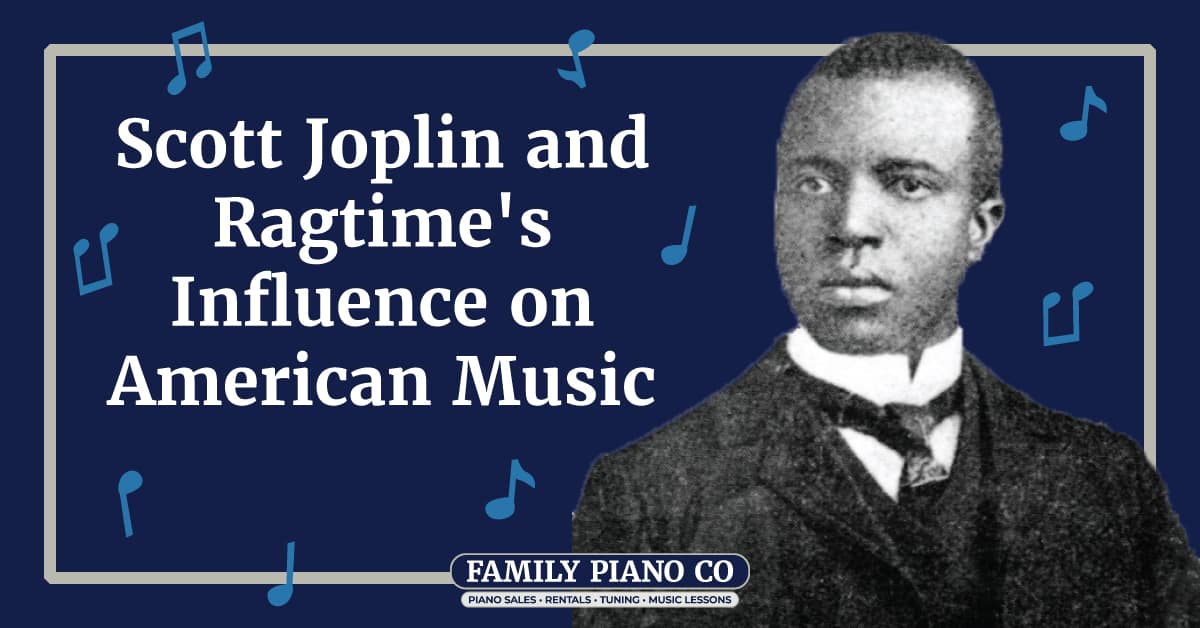 This year for Black History Month, we’re going to be releasing some content that explores the history of Black musicians and the music they make. We hope that—like us—you learn something new along the way!
Two weeks ago, we highlighted 6 Black Pianists You Should Know About. The second mention of the list was Scott Joplin. If you are a pianist or a ragtime fan — or into music in general — this definitely isn’t surprising.

And if you’ve been friends of ours for a while, you’re probably even familiar with our old side hustle as a coffee shop: Joplin’s Java.

This of course, was named after the same Scott Joplin. Our co-founder, Mark McLeod, was a big fan of his, and he used many of Joplin’s rags as demos when tuning and selling pianos.

We ended up closing Joplin’s Java around 2013 to focus on. . . well, being a piano store. But we still have remnants of those old days.

Scott Joplin wasn’t just an inspiration to us though, he is a commemorated figure musically and historically. I don’t think it’s possible to have never heard “The Entertainer” or “Maple Leaf Rag” — even if some non-musicians only identify with them as ice cream truck songs or music that comes on during a bar fight in a silent movie. Arguably more significantly, he was one of the first African Americans to be accepted in Western music, paving the way for other black musicians and many music genres to come.

Scott Joplin was born sometime in 1868 somewhere in Texas. Details about his birth aren’t exactly agreed upon, but it known that he had a musical upbringing from the very start.

Joplin was raised in Arkansas by a family of railway workers. His father, a former slave, played fiddle at plantation parties; his mother, a freeborn woman, played banjo and sang.

By the time Joplin was seven, he began learning to play piano, and he quickly became very serious about music. He received lessons from local teachers, his most significant mentor being Julius Weiss, a German-born Jewish American.

Given his background, Weiss was no stranger to racism, and recognizing Joplin’s situation and passion, he taught him for free for five years. Weiss is credited for teaching Joplin music not only as a form of art, but also as entertainment. This thought would eventually lead Joplin towards discovering his signature playing style.

Sometime in his 20s, Joplin left Texas to become a traveling musician. He struggled to get by during this time since very few people were willing to pay a black pianist to perform. However, in 1893, he made his way up to Chicago for the World’s Fair, where he reinvented his “jig piano” repertoire and popularized it as ragtime.

The Rise of Ragtime

The World’s Fair was attended by 27 million people. Although the event didn’t put the spotlight on any black artists and performers, their music was very popular with many in attendance.

And while no source can 100% confirm this, it is thought that ragtime was one of those genres, and that it caught its break here. Regardless of specifics though, it is documented that within five years following the World’s Fair, ragtime had exploded nationally.

And what’s important to realize is that at the turn of the century, piano was still closely tied to ideas of elegance and high-class. So playing music on it that had swing and syncopation was almost unheard of and certainly shocking to many.

Joplin was able to combine elements of American music with elements of European classical music in a novel way, and it resulted in a genre that was refreshingly accessible and lively. People enjoyed listening to rags not only for their technicality and artistry, but also because they could dance to them.

At this point, it’s important to mention that ragtime was not without “criticism” (read: racism).

The St. Louis Dispatch, one of the city’s daily newspapers, referred to the music as a “veritable call of the wild, which mightily stirred the pulses of city bred people.”

Moreover, many popular cakewalk songs that were published as sheet music during the 1890s were being referred to by a name I don’t feel comfortable typing. Ernest Hogan wrote a certain 1896 piece which is likely the subgenre’s most popular example, if you’re feeling curious.

Regardless of these “critics” though, ragtime did take the country by storm. And this newer concept of what music could be opened the floodgate for other genres to develop. Ideas from ragtime and blues eventually became jazz which continued on to influence swing, rhythm and blues, rock and roll — and well, the rest is history.

For more of this information on the early development of American music, read:  The Black Roots of Your Favorite Genres

Up until his death, Scott Joplin continued touring and composing. Then following his passing, ragtime began to dwindle in popularity.

So it’s unfortunate to say that he never quite reached the level of praise that we award him today. Many of the operas he wrote were thought of as vulgar in comparison to European grand opera. It’s also claimed that “Maple Leaf Rag” only paid him a 1¢-per-sale royalty, which at the most still only amounted to $19,000 annually (adjusted for inflation).

The catalyst for Joplin’s modern acceptance actually and finally happened in 1970. This was when Joshua Rifkin’s Scott Joplin: Piano Rags was released. Following that album, Joplin began becoming the famous figure he is today. And after “The Entertainer” was used in the 1973 George Roy Hill film, The Sting, his role in the piano canon was cemented.

In the Context of African American Pianists

What’s particularly special to me about Scott Joplin is that he pioneered the earliest popular American music genre. I find it fitting that we can credit that to a black American, especially considering how many more black artists after him would dawn similarly huge levels of influence on this country’s culture.

I also love that Scott Joplin isn’t only recognized as a black pianist either. Piano is strongly rooted in classical music, a genre mostly represented by the contributions of European men a couple-hundred years ago. Of course, that’s to be expected since classical music is European. But the upholding of that style’s theory in the Western music meta has led to an underrepresentation in black pianists that’s present still today.

George Walker, the first African American to win the Pulitzer Prize for music (1996, twenty years after Scott Joplin’s posthumous award), commented as such during a 1987 interview:

I’ve benefited from being a Black Composer in the sense that when there were symposiums given of music by black composers funded by the Rockefeller Foundation, I would get performances by orchestras that otherwise would not have done the works. The other aspect, of course, is that if I were not black, I would have had a far wider dispersion of my music and more performances.

It’s a two-edged sword and I think that one can take the stance that if you remove “black” from my name, it’s going to be more meaningful because I’m still an outsider and will continue to be an outsider from the coterie of well-known and established white composer.

Of course, only part of the issue could have to do with historical roots. Another problem is the lack of musical education in non-affluent and black communities. Art programs are generally one of the first things to go after budget cuts. Systemic issues like these prove to be barriers to entry for black people to this day.

But regardless of what or why or how, it is a shame that black composers and pianists aren’t regularly celebrated in the way Scott Joplin is. You’re most likely to hear George Walker or Florence Price or Chevalier de Saint-Georges mentioned during Black History Month, and that’s such a disservice!

So I love that Family Piano’s old coffee shop pays homage to Scott Joplin. He’s one of the most important figures in piano, and his impact on music truly can’t be understated.

Without his contributions, I’m not even sure piano would’ve become as important as it is to popular American music today. And of course, he is one of the earliest examples of black excellence in the United States — even if he wasn’t recognized as such during his lifetime.

The King of Ragtime didn’t write “The Entertainer” thinking about himself, but it certainly is appropriate that he did write it being America’s first major example of one.

Thanks for reading if you made it this far! Although this is the last blog post in our Black History Month series, we encourage you to continue celebrating black culture. The story of Scott Joplin and other African Americans who had an impact on our culture isn’t just black history — it’s American history. 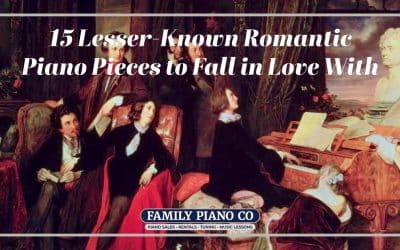 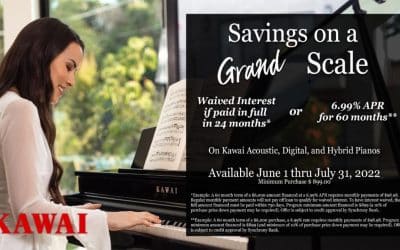